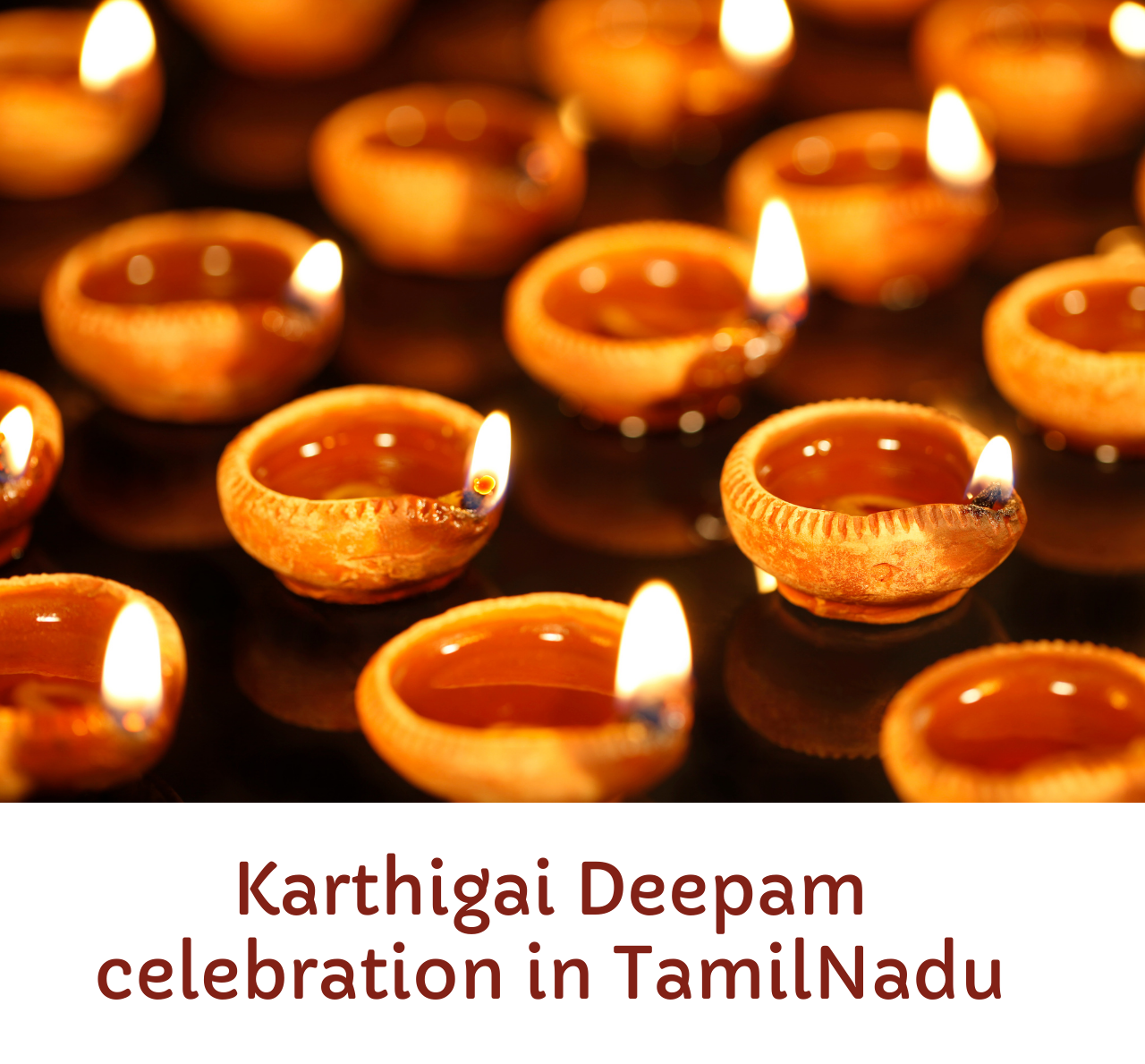 We all know people celebrate “Deepavali/Diwali” as a festival of lights all over India. In India’s southern part, we celebrate Karthigai deepam as the “Festival of lights/lamps” in Tamil Nadu. Karthigai deepam is one of the ancient festivals in the history of Tamil Nadu, and it has two different versions of history. Are you interested in knowing them? Please scroll through, and let’s dive into the festival mood.

We have two different versions of karthigai deepam based on the history . Lord Shiva and his son Lord Murugan are the primary Gods during this festival. 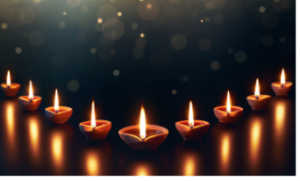 Once upon a time, Lord Brahma and Lord Vishnu started arguing to find “who is the greatest” due to an ego clash.   At that time, God Shiva appeared in the form of fire and told them whoever finds the fire’s top or bottom is the greatest. Brahma took Annam’s form (swan – a bird) and tried to find the top of the fire pillar. Vishnu took the form of Varaha( giant pig) and tried to see the pillar’s bottom. As God has no limit in his size or power, both of them could not see either top or bottom of the fire. When their ego went down, and they prayed the God, He appeared before them. 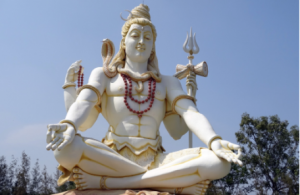 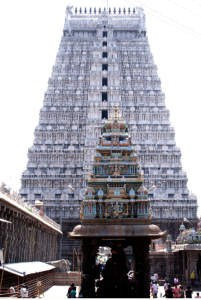 Long long ago, a demon called “Tharagasuran” was demolishing the world with all his power. As this was utterly shattering humanity, all the gods realized that only Lord shiva’s son could destroy this demon and save the world. We all know Lord Shiva has a third eye. Due to some reason, Lord Shiva was in anger with Kaman, lord of love. To punish him, he opened his third eye and burnt him into ashes. These ashes fell into six different places in a forest called Saravana poigai and it, in turn, changed as six babies. Karthigai pengal (Karthika ladies) raise those six babies. On the day of karthigai, Goddess Parvathi combined all six babies into a single form, “Lord Murugan.” He then led the army and demolished the demons.

We call Lord Muruga “Karthikeyan” as he was born on the day of karthigai. Aarumugan(Six faces) is a combination of 6 babies, Skandan, Guhan, and many different names. This day is called Birth of Lord Murugan, who is “Tamizh kadavul”( Tamil God) 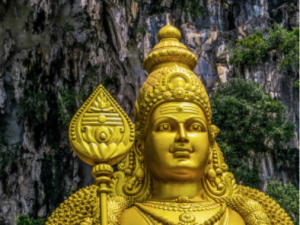 First day of this festival is called as “Appa karthigai” and the second day is called as “Vadai Karthigai”. All devotees will offer Pori, Adhirasam, Vella Seedai, Vetrilai pakku, Fruits as Neivedhyam for God Shiva.

Karthigai deepam is a three day celebration and the first day is called Bharani deepam . On this day, we clean up the house and lit up a minimal clay lamp all over the house.

Second day is Karthigai deepam and this is the primary celebration day. On this day, we cleaned up all the clay lamps, soaked the thread in oil, apply sandalwood powder/Kumkum to lamps  and lit them up after sunset. We use silver and bronze lamps too and keep it all around the house and outside too. In our family, we wear nine yards Saree while lighting up the lamps. In our culture, we consider blowing up the lamp as a bad sign. So, we mostly switch it off by putting a drop of milk. We save some crackers from Diwali and burst it on karthigai deepam as well.

All the married girls get seer varisai (Gifts) from their parents place as this is one important ritual we follow for all festivals. 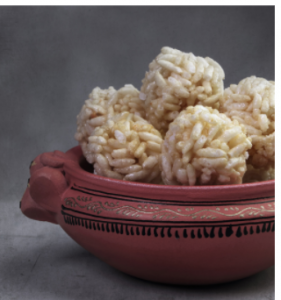 Third day is Kuppa karthigai. On this day, a bonfire is lit in front of most of the temple, symbolizing all bad things are getting burnt. And we lit the lamp on this day as well, especially near the backside of the house.

Karthigai deepam is one of the important festival in TamilNadu and we consider it as “Festival of lights/Lamps”. Every other culture has more unique value in it and it is more interesting to know the details. Let’s praise each one of them. Hope you all enjoyed reading the blog post on “Karthihgai deepam”. Please drop a comment and share, if you like it.

Deepika Sureshkumar worked in the software Industry for more than 6 years.After becoming mom she took a career breask and started to work on quiet books. Under the brand “Creative_Puppetz“,she comes up with book designs and her team stitches these cloth books. She writes on Parenting tips, book reviews , toys and multiple DIY activities which she makes for her daughter under the handle @journalsofmomma on instagram.

Living in Atlanta, USA with her husband and daughter, she enjoys watching all the best movies from various languages.

Any cookies that may not be particularly necessary for the website to function and is used specifically to collect user personal data via analytics, ads, other embedded contents are termed as non-necessary cookies. It is mandatory to procure user consent prior to running these cookies on your website.